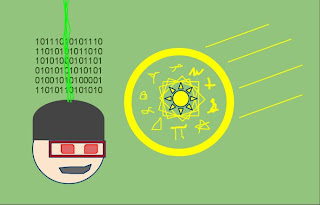 Remember when virtual reality was going to be part of every aspect of computing, nay, life itself? Neither do I. The closest I remember to thinking virtual reality was going to be useful for something was that scene in Jurassic Park (1993) when the scientist was using a gloves and goggles setup to manipulate a DNA double helix in 3D. The makers of The Lawnmower Man, however, really bought into VR as the technology of the future, and simultaneously roped in Pierce Brosnan to play the protagonist in this shabby special effects showpiece. For some reason, I had a notion that this was a widely regarded horror film, but I think I confused this movie and Hellraiser (1987), a mistake that would cost me 107 minutes.

I read a novel in grade school called Flowers for Algernon where a cognitively disabled man is given the same surgery as a mouse in order to vastly improve his intelligence. Apparently the characters in this movie had no contact with this book, as their message is mostly the same. I’ve seen other movies where people are vaulted to genius from relative obscurity (Phenomenon (1996) with Travolta comes to mind) and they all seem to reach the same conclusion: with super genius comes utter contempt for your former idiot friends and a soul crushing loneliness that is only alleviated by your death or eventual redumbification.

The poor, dimwitted “Lawnmower Man” Jobe (Jeff Fahey)–BTW, since when is “Lawnmower Man” a pseudonym for folks who cut grass for a living?–anyway, his only skill seems to be designing ridiculous looking lawnmowers, cutting grass, and working on his abs, though we don’t see the last one in any scenes of the movie. Dr. Angelo, who’s recent chimpanzee subject killed a bunch of guards, decides it’s time to move on to a human subject. If only the damn military weren’t corrupting his research, and injecting rage-ohol into his subjects along with the super brain drugs. Jobe starts his training, which consists of Dr. Angelo throwing Aztec calendars and Alchemy charts at his face in a virtual world. Unexpectedly (for those in the movie only) Jobe starts developing superhuman powers and hatches a plan to dominate the world.

If nothing else, this film has value in that it was just plain wrong about virtual reality. Take a look at this highly scientific caption that begins the movie: 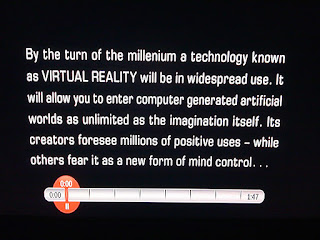 CYBERDATE: 2 JULY 2010
LOCATION: The cyber-underground bunker, the last place VIRTUAL REALITY is not in widespread use

Hello my virtual friends. Brace yourself for this communication, and make sure you have enough time to download it on your 56k modem, print on your dot matrix printer, and delete it before Jobe’s VirtuaCops detect you with their VR helmet scanners.

I am composing this message in the underground, using what they referred to in the 20th century as a “key-board.” Sure, it’d be easy to compose this message by strapping on my virtual reality helmet, gloves with wires attached to the fingers, and a tight fitting body suit with neon piping that glows for no explainable reason, but then I’d be opening myself up to Jobe’s mind control algorithm, and I won’t do that.

I know it might be tempting to use the technology of VIRTUAL REALITY to enter computer generated worlds as unlimited as the imagination itself, where you can access the millions of positive uses that the creators of this technology envisioned, but stay strong my brothers and sisters of the resistance. Until next non-VIRTUAL REALITY cyber-textual-communication activity, formerly known as “electronic-mailing”

4/10: We were promised virtual reality 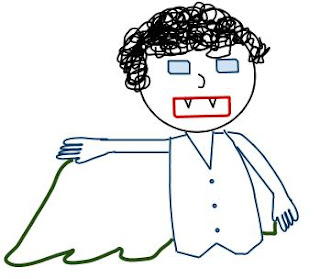 Vampire films are all allusions to the original: Dracula by Bram Stoker. As an English major undergraduate at UIUC, I was required to take a class called “Major Authors.” I had my choice of Bram Stoker/Oscar Wilde, or George Elliot (who, like Dave Eggers, I probably thought was a man at the time). I’m not sure what I missed out on, but judging by some of my friends who had to read Middlemarch, I think I made the correct call.

With the explosion of interest in serialized vampire novels kicked off by The Vampire Chronicles and Interview with the Vampire by Ann Rice, vampires appear much less like the demonic cavern dwellers of Nosferatu (1922) and much more like various superhero incarnations, each new series having to set out the rules, or as they should now be called, the super powers that vampires possess over us blood banks. In the Twilight chronicles for instance, male vampires must unbutton their shirts halfway and pretend to be James Dean.

Cirque du Freak is no different. Vampires in this world can move super fast, slash things with their fingernail claws, and emit a noxious gas that incapacitates humans (with a deliberately open ended line of dialogue that leaves the possibility open for even more super powers).

As the title suggests, a boy has a “chance” encounter with a vampire (John C. Riley) who is a major player in one camp of vampires along with a character played by Willem Defoe. They are the retired leaders of the anti-killing humans camp, or “vampires.” Then there are the “vampaneese” who still kill humans when feeding, and quarell with the vampires, but are currently kept at bay by a tenuous truce which the Cirque, a traveling freak show, somehow (inexplicably) maintains.

The movie plays around this central tension and develops characters quite well, but ultimately comes across as a sequel delivery system. It took until a few minutes into the climactic fight sequence at the end of the film for me to realize that this was the climactic fight sequence. I don’t think it was the fault of the writer/director Paul Weitz, so much as it was the fact that this is poised as an opening chapter in a series from the first five minutes of the film. The voice-over delivered by the protagonist (Chris Massoglia) reminded me a great deal of the first Spiderman movie for some reason, and it eventually drops off to give way to the action of the plot.

Of course, a good versus evil binary emerges that will no doubt play out in a sequel, if there ever is one. This film scored low on RT and Metacritic, so who knows if it will ever see another incarnation. It seems that a lot of films are made on the assumption that a sequel will resolve the plot and tie up any loose ends. That might work for adaptations with a huge fan base (Harry Potter), but this film feels like a television pilot that may never get picked up. Not only that, the story seemed so rushed and condensed that I feel like it must have hardly done justice to the first book in the series. Seeing as this is a twelve book saga, I doubt that the collective capitalistic dream of making twelve movies to go along with the books will ever come true.

Note: If you are looking for a better performance as a vampire by Willem Dafoe, and generally a much better vampire film, check out Daybreakers (2009).

Much like Hook (1991), Alice in Wonderland sends an aged protagonist back to a fantasy land in an amnesiac state to resolve an unfinished conflict from his and her first visit, respectively. Hook by all critics’ accounts was an abomination of a classic fairytale (22% on rottentomatoes.com), but damn it I liked it. There was tension between a middle class, overworked family man and his neglected children, who Robin Williams (the perennial man-child) must reconcile with through a reversion to childlike innocence that he lost in the damnable workaday world.

Alice in Wonderland offers us nothing close to this level of complexity, other than the tomboyish Alice living a century in the future in her ideals, which all live action Disney protagonists seem to do as a repentance for the widespread misogyny of the corporation’s animated features. The line “I don’t believe in corsets” reminds me all too much of Keira Knightly’s line in Pirates of the Caribbean (2003):

With a defiant look on her face

In short, there is no pretext for a revisit to Wonderland, much like there was no pretext for other Tim Burton remakes (Charlie and the Chocolate Factory (2005) and Sweeney Todd: The Demon Barber of Fleet Street (2007)). Mr. Burton has shown his penchant for remaking pop culture mythology (see his fabulous Batman and Batman Returns) but he perhaps relies too much on his writers to deliver him a script worth following, and there is no question about his over-reliance on CGI in this film. There was once a day, that is embedded in our collective nostalgia, where real actors were called upon to gesticulate, emote, and suffer ludicrous makeup and wardrobes in order to present an otherworldly image of fantastic brilliance which captivated our attention for two hours. In a sentence, the death of such an era in this film may be summed up as follows: “one of the best performances was Helena Bonham Carter’s voice.”

Motion capture when combined with CGI may prove a valuable tool for filmmakers (see my review of Avatar), but it is far from perfected. In general, acting performances were lukewarm with no real convincing or endearing charcters, John Depp’s Mad Hatter least of all. No amount of sashaying or, regrettably, break dancing, can make the screenwriting any better than it is.

I won’t go so far as to point out the historical inaccuracies in gender politics (you can ask me in person if you care), but it seems like no thought at all was put into the framing device for Alice’s journey. At best, giving the writer (Linda Woolverton) the benefit of the doubt as she wrote for classics such as Beauty and the Beast (1991) and The Lion King (1994), there may have been an editor who chopped this segment of the movie to hell; however, the writing is unforgiving and the lines are delivered in the modern style of “sponge in mouth” a.k.a. “mouthful of cookies” so that half the movie is unintelligible. A disappointment to be sure:

3/10: Redbox/Netflix only, and only during summer