I’m trying to finish my dissertation this semester (again), so I did a sort of audit of my teaching practices during the summer semester to see what I am spending the most time on. I thought it would be helpful work out some changes to my approach here:

I don’t think things were necessarily better back in the day (e.g. white-knuckling it to the department office to slap a printed copy of your term paper in a mailbox before 5pm); however, I do remember being held accountable more often than I hold my students accountable. I also think students asked more questions in class and actually came to office hours because professors didn’t carry around a distraction device that connected them to their email accounts 24/7.

These are my modest goals for this semester. I’ve been told before to be selfish with my time, but I don’t think these fit into that mold. I want my students to become more empowered to handle stuff on their own, and less dependent on me to clear everything up for them. They might even (gasp!) contact a classmate before asking me. Before emails and constant contact with professors, this was pretty much how it was done. 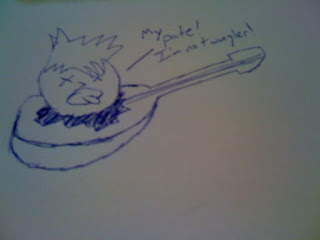 As the daunting task of teaching and interpreting Shakespeare approacheth, I figured I better start revisiting most plays sooner rather than later. Being a newly freed letharge, I only managed to see the performance of William Shakespeare’s The Taming of the Shrew. However, TOTS being one of the texts I was responsible for in my MA comprehensive exam of a couple years ago, I feel reasonably confident in reviewing this play without a thorough rereading.

The plot: a student (Lucentio) trades places with his servant in order to get up close and personal with the beautiful Bianca, daughter to Baptista who will only allow her marriage when his oldest daughter, the shrewish scold Katharine, is married off. A fortune seeking adventurer (Petruchio) forcibly marries Katherine to secure a large inheritance, thereby opening the three-way courting contest for Bianca, which Lucentio and ultimately wins through some additional deceptions. Petruchio seemingly succeeds in breaking the strong willed Katharine into submission with relentless verbal abuse and starvation/sleep deprivation, thereby once again proving that verbal and physical abuse is the tried and true method to put women into their place, as slaves to men, men who built the Eiffel tower out of steel…and bronze. Oh, and there’s a lot of sexual innuendos and double entendres along the way.

As with most of my man WS’s plays, this is an amalgamation of previous written accounts (in this case, of shrew taming) and cultural artifacts, if not a direct rip off of another play. The questionable nature of authorage aside, shrew taming speaks to a rather bleak interpretation of spousal relations in 16 c. England, namely that women must be broken down into obedient servants. The close reader will note subtle opportunities where a director may take creative license and empower Katharina (aka Katherine, Kate), but subtlety is not the direction Ms. Rourke (the director) chose to take.

The text of the play includes a built-in framing device, whereby Christopher Sly (a beggar) is the subject of a cruel place-switching rouse put on by a rich guy looking for a laugh. Sly wakes up after a night of drinking and is fooled into thinking that his life as a beggar was a horrible dream and that he is a wealthy lord, who has players to perform TOTS for him. This framing device is dispensed with, and is replaced with a questionable update.

The players in the CST update are represented as actors in a production riddled with technical problems and personal disputes, but really it is just ham-handed commentary about the misogynistic nature of the play itself. Also, as a literature snob, I would like to point out the difference between a framing device and a subplot. A framing device, much like a frame around a fine piece of art, gives the story a space to occupy and a purported reason for existence. This is a relatively old concept mastered by authors centuries ago. Like any frame on a piece of artwork, it should draw the eye to the art itself, or complement the art it encases. A subplot is a thread of action that occurs beneath the surface of a piece of literature and is referenced and updated in between the main action, and resolves itself or coalesces with the main plot by the end of the story.

In the case of the CST TOTS, the “framing device” consists of a preface to the opening scene which frames the story, but it goes on to appear as an interlude following the third act prior to intermission, a second interlude upon returning from intermission preceding the fourth act, and coalesces with the finale in the fifth act, not to mention some references within the action of WS’s play itself. It is, without a doubt, a subplot, that the audience must constantly have at the back of their minds during the play, in addition to the concurrent plots within the play.

In any case, gendered representations in the subplot may be summarized as follows: all female actors are firery, vindictive lesbians, and all male actors are either boorish, hyper-masculine asses or, as Dan Savage would articulate, complete swishes needing only a dyed pink poodle to cement the role. The subplot plays to the lowest common denominator in gender and sexual politics, beating the audience over the head with commentary that one would think a 21st c. audience need not hear to understand misogynistic elements in WS’s play (an unusual development for the CST as I have never once felt their performances to be anything less than an intelligent reading of WS). Oh, and one more thing I HATE!! before I go on to the best parts: people, no matter how dramatic the situation, will at most walk away from an argument once or twice, not seventeen times. If you’re leaving the stage, get the hell off. If you’re staying to argue, stop pretending like your going to leave: you’re not fooling anyone.

Whew…I must have had too much afternoon coffee just now. Ah, but there were too many good moments in the play itself to end this review on bashing the banal subplot. Petruchio (Ian Bedford) and Katharine (Bianca Amato) spar verbally with passionate intensity, and the bit players, as always in a CST show, glue the production together (most notable was Steven Pringle as the Pedant who has perhaps the fewest lines in the play, but makes them among the most memorable). While the physical comedy was overdone at some points (the peril of The Three Stooges effect), there was still enough really great humor to recommend the play as worthwhile. I was exceedingly happy that pelvic thrusts were kept to a minimum after being traumatized years ago by a college performance of the feminist rebuttal play The Tamer Tamed , however the ridiculous codpieces more than make up for that I suppose.

I’m a bit sore that I paid full price for it, but overall it was yet another worthwhile comedy from the CST. However, I must say that it left me wanting a repeat of the absolutely hilarious performance of A Comedy of Errors four or so years back. As such, I am looking forward to As You Like It next year. With that in mind, I’ll rate TOTS as: