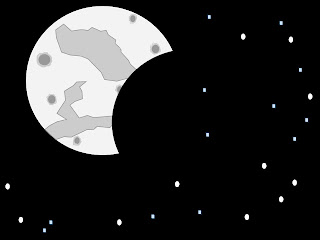 I tried to see what the deal was with Moon by doing a Google news search, but between Despicable Me and Twilight: 3/4 Harvest Moon, or whatever the new one is, I gave up immediately. I wanted to know where this film came from and how it ended up on my TV since I don’t remember any trailers or reviews, but it was in my Redbox list since like last year and is still available there (and on Netflix Instant Que).

The SciFi elements of this film exist to both provide a backdrop and premise for the action, but also to showcase the moral and ethical dilemmas inherent at the film’s core. It’s hard to summarize without giving away the many revelations at the heart of the film, so I’ll merely set the stage for you. Sam Rockwell (Iron Man 2, Choke) plays Sam Bell, a solitary worker on the moon who collects moon rocks from giant skimmers that reminded me a lot of the harvesters in Command and Conquer (I know, supernerd). The moon rocks power “70% of Earth’s energy needs” and his job, while incredibly important, is extremely monotonous and drives him to distraction and disinterest. As with most endurance films, things start to break down right around the end of his time there, worrying his only companion: a robot that is ingeniously done up as the type you would see assembling cars, but with artificial intelligence that makes him capable of affection for Sam, even if it is programmed. Anyway, things are looking pretty good for Sam’s departure before an accident occurs, which will reveal a lot more about what’s going on up on the moon.

There’s a lot to like about this film. If you dug 2001: A Space Oddssey (1968) which is really a first rate science fiction film, then you will dig this. Moon has the benefit of CGI, but its use is not to generate poorly-rendered Rastafarian aliens: it serves as a tasteful and complementary backdrop to the set pieces which really make you think of Kubrick. Kevin Spacey does his best HAL as the voice of the robot, which cashed in on 2001 without completely ripping it off, but I don’t think his vocal performance could get any closer to the original monotone voiced by Douglas Rain.

The tension between laxity and the perfection needed to exist in a zero atmosphere environment where the slightest miscalculation or mistake can instantly kill you in the most painful way possible is really demonstrated here. There is one particular scene where Sam tries to pass off a minor mistake caused by psychological stress as a simple accident, only to have the robot grill him with questions. Every ancillary detail of the film (carving miniatures with a pen knife, botany, ping pong) is presented in a way which heightens the fact that we often expend an extraordinary amount of attention on what we like to do, and tend to treat the monotonous work of everyday which is critical to other people and our own survival as a cakewalk (perhaps to exercise control over that which we are masters of in order to defray the tension of the uncontrollable or that which challenges us the most…).

7/10: Speaking of diffusing some tension, a lighter side of the moon