I was visiting my brother and his family last weekend, and after dinner we played a game my sister-in-law had salvaged from a thrift store: Go to the Head of the Class. The board reminded me of Around the World, which you probably remember from such high school romps as “Learn Your Spanish Verb Conjugations” or “Master the Names Associated with the Holy Roman Empire.” The game, while fun, is actually quite complicated and took us about two hours to complete, mostly because of the bizarre affinity in the question bank for musical composers (Irving Berlin’s name came up an abnormal number of times) as well as the stiff penalties associated with a lack of enthusiasm for musical theater popular to 1967 board game aficionados.

I joked to my niece that board games were the internet when I was growing up, an observation that produced the proper level of eye rolling (excessive). 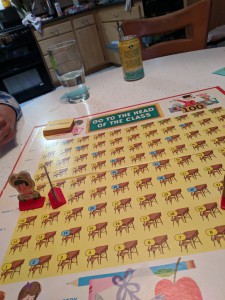 I realized that I didn’t even know what the first board game was. It is The Checkered Game of Life by Mr. Milton Bradley himself, ca. 1860. It’s preceded by any number of checkers varieties, which it undoubtedly copies (“checkered” as in “game board resembling a checker board”), but it includes such quintessentially upbeat American outcomes as “Prison,” “Ruin,” and “Disgrace” (see also “checkered” as in “marked by periods of varied fortune or discreditable incidents”). The perfect game for the city on the hill.

The first version of Monopoly was an anti-capitalist teaching tool co-opted by Parker Brothers. I’m not sure it comes across with the same message now, having just played a Star Wars version with my nephew last Christmas. At least you learn math; does Fortnyte teach you that? I think not (but I know not either, nor am I sure I spelled the name of that video game correctly).

I owe countless hours of childhood happiness to Milton Bradley and Parker Brothers, playing games like Axis and Allies, Fortress America, Shogun, and Conquest of the Empire. I still love Risk, but find little opportunity to play it having few friends (grad school).

I occasionally see people playing European-style board games that emphasize cooperation, but for me the American board game emphasizing ruthless dominance, backstabbing, and arbitrarily complex rules (though Euro games have made headway there) have a special place as the games of my youth. If only we could take out our frustrations via a board game about Feudal Japan instead of endless rage spirals on Twitter.