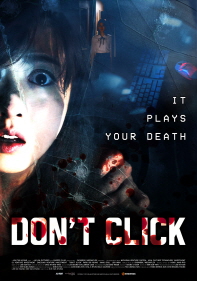 Nicole and I went to the (most likely) one and only film from the CIFF that we can fit into our schedule this year due to dissertation / conference related activities, and it was pretty decent. If you have the time and a little cash, you can check out the festival all through this week at AMC River East. I recommend advanced ticket purchases if you care a great deal about a film, but you can get box office tickets pretty easily.

The description of this film offers it up as an “updated version of cult Japanese horror film Ringu for the dot-com generation,” and though there are some similarities, it doesn’t resemble much about Ringu from what I can remember of the film. Both involve viewing and distributing a disturbing piece of video linked to a vicious ghost, but Don’t Click offers a much fresher take on the archetypal chain letter anxiety that is at once similar, and also distanced from traditional narratives of this type.

(I should note here that I don’t have character names since the film is not listed on IMDB, so I have to use stock descriptions of the characters in my plot summary not out of disrespect, but necessity since I didn’t take any notes.)

Adding to those typical anxieties is a pervasive sense of surveillance, which I found really interesting having just read a bit about social media surveillance and having attending a conference where privacy was discussed extensively (one of the professors on my dissertation committee who gave a talk at the conference is a privacy expert as well). The landscape in which the characters interact is not only flooded with top down surveillance in the form of store surveillance cameras and CCTV public safety cameras, but it is also dominated by peer surveillance in the form of cell phone cameras. The protagonist of the film, when she notices disturbing behavior from her teenage sister (whom she cares for) installs surveillance cameras in her home, as well as a mobile camera and GPS tracking device in a Trojan teddy bear placed in her room.

It’s no coincidence that the protagonist’s boyfriend works as a consultant to a computer crime division at a law enforcement agency. The boyfriend approaches the little sister to help mend his relationship to big sis, but the little sister demands a banned viral video which approximates the cursed videotape in Ringu or it’s Americanization, The Ring (2002).

A a quasi-spoiler (I’m not sure what it would spoil, but it may ruin something for you if you want to watch): it turns out that the ghost can only kill you when you see yourself on camera, be it cell phone, CCTV, or other. The film in general takes great care to make computing, the use of cell phones, and all technology-associated camera work convincing, which is something that American films sorely lack. I can’t tell you how many times I’ve been irrationally aggravated at people typing in search engine text boxes that are right-aligned, or using some operating system that is clearly Windows, but disguised for some stupid reason (probably related to copyrights or defamation). I wanted to ask(/compliment) the director about this, but the Q and A was short due to the end time of the screening (12:30am) and the need for questions and answers to be translated.

Some minor aspects of the film failed in the international setting. The subtitles were poorly done (I assume at the last minute) and difficult to read/understand. Also, a lot of the semantic web content had captions that appeared for only a fraction of a second. It is obviously a tough problem to capture content of that nature: popular websites for us have a familiar appearance that we grow accustomed to and need only view for a fraction of a second to glean their meaning. Try looking at some sites from your past on archive.org and seeing if you can recognize them then versus now. Unfamiliar layouts, colors, and other branding issues really obscure what we’re supposed to be seeing (in addition to the obvious language barrier). I assume Korean internet users got much more out of those brief screen shots that I did.

Apart from the information gap, there was a huge amount of screaming in the film. At some points, I was reminded of the dinner table scene from The Texas Chainsaw Massacre (1974). The volume was poorly adjusted, so it was piercingly loud. If you know me, you know that I am deaf as a post, and it was still painful to experience the shrill screaming for at least 50% of the film’s runtime at the volume in that theater room at AMC River East. In this case, a home viewing might have been preferable as I left the theater with a splitting headache.

You can still get tickets for the showing on Friday, 10/19, though the director will not be present for Q and A.