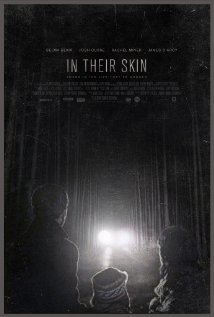 Nicole and I managed to wedge in one more film from the CIFF, and what a surprise, it was another horror film.

In Their Skin tells the story of the Hughes family, who has just recently lost their young daughter. The father, Mark (Joshua Close) and mother, Mary (Selma Blair) have a marriage that is reduced to shambles, and a trip to their swanky cottage out of season is clearly the last attempt at salvaging their relationship and family (they have a young son).

After arriving, Mark encounters an oddball “family” inexplicably stocking the woodpile outside his back door at the crack of dawn. After a tense encounter, Mark invites them over for dinner along with his brother (apparently trying to interject anything and anyone into the mix to dispel the unbearable tension between himself and Mary). At the dinner, it becomes clear that the neighbors they have invited into their house are not in the same social class by a longshot, as they ask question after uncomfortable question of them, including such class reminders as “How does someone get a house like this?” and “I’ve never had dinner with a lawyer before,” etc. The situation escalates until you have a standard, though slightly amped up version of a home invasion thriller.

In the Q and A following the film, Regimbal made it clear that the class difference was central to the architecture of the plot, yet I found a bit of fault in the standard privileged urbanite=good/victim versus hillbilly=bad dichotomy that this film perpetuates. Coming from a small town, not everyone is a deranged hick waiting to violate and kill your family, I promise. Most horror films tend to desperately cling to this mantra, and this film does little to challenge it; there is a lackluster attempt to prove that rich urbanites are not perfect, but mostly they struggle with “rich person problems” while the crazy hicks act all stupid crazy.

In our post film discussion, Nicole pointed out to me that there was a lot of subtext about identity and how people freely give away information, which in itself is a huge anxiety explored in horror films. I admit I missed that subtext a bit, and that dimension salvages the film for me. The original title of this film was Replica, which makes sense given the later revelations of the antagonists with respect to identity theft. I suppose that a rewatch might reveal that the initial conversations which appeared only as odd might in fact contain a great deal of suspenseful probing as Nicole suggested.

And, as it happens, a rewatch (or first viewing in your case) is not out of the question as the film will open next month in U.S. and Canadian markets. To me, the film was strongly reminiscient of Cape Fear (1991) in many of it’s plot points. Also, Rachel Miner (who plays the crazy lady) appears to have taken lessons from the Juliette Lewis school of acting. I also heard Funny Games (2007) bandied about during Q and A, though I haven’t seen it. If you are into home invasion thrillers, this film is a solid entry with some interesting subtext that offers a slightly new contribution, but ultimately needed a bit more ingenuity to make an original contribution to the genre.