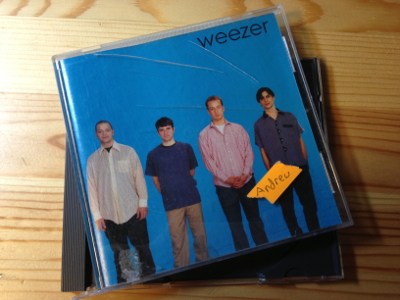 Weezer signed with 90’s megalith David Geffen and broke big in 1994, but their sound was not really typical of most grunge acts coming out of the West Coast. It has a quirky, (mainly) upbeat quality that combines the loudness of electric guitars and some decent solos with melodic acoustic guitars. It also comes across as glossy, and really embodies the “alternative rock” style of measured amounts of distortion and feedback. Each song on the album follows a singular vision, and the pacing is pretty tight by 1990’s standards (all but the last track clock in around five minutes). There’s a lot of good emo bands that came about as a result of Weezer (1994) (most commonly referred to as “the Blue Album” for obvious reasons), but the legacy of the band waned and they are mainly relegated to the laughing-stocks now.

I want to talk mostly about Weezer’s big break, which came from the laughable corporate sellout when the unholy Masters of Music combined with Bill Gates to slap the music video for “Buddy Holly” (a single from the album) onto the Windows 95 start up disc. I remember being at my friend’s house watching the video on his Gateway computer, and I guess the point of this promotion was to demonstrate the video capabilities of early microprocessors. It was a pretty effective demonstration for 1995, but we didn’t even have internet connectivity in the sticks in those days, so after watching the video my young brain was left wondering how this could really translate into more music consumption.

I guess the answer came in the form of compact discs when, as an 11-year-old boy, I finally owned my first CD: this one.

All too easily I fell into the trap of the consumer music culture and never looked back. Watching the video for “Buddy Holly” now as a 30-year-old man, I’m reminded how catchy the hook is and how tight the vocals are, but the video itself (directed by Spike Jonze) is entirely devoid of any clear idea other than “let’s get those Weezer fellows into Happy Days somehow.” 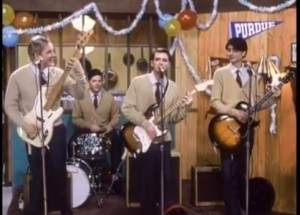 Happy Days was in syndication at the time as I recall, so I’m sure that I knew who the characters were then, but I’ll be damned if I can remember anyone but the Fonz now. As a result, none of the disconnected sequences in the video really make any sense to me; if they were supposed to elicit a nostalgic response they failed on all levels. Likewise, the trick of putting actors into a live-action sequence from a television show must have been quite the technical feat in 1994, but now pretty much any teenager in their basement with a PC can edit together a sequence of Ronald Reagan French kissing Mikhail Gorbachev on top of the Berlin wall with minimal effort.

The band appears as a 1950’s rock and roll combo in matching sweater outfits. They cast congenial grins at the crowd, innocently flirting with female characters from the show. The surrounding action only barely matches up to the events on stage, which I’m guessing is due to technical limitations. I kept watching expecting something to happen, but the band just finished their song and left the stage. As far as Jonze’s message, I must be missing out on any potential subversiveness, as the video plays almost like fanfic for Happy Days. 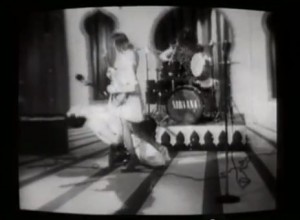 So I swear now that I don’t plan on comparing every piece of music in the 90’s to Nirvana, but there is a good point of contrast here. Nirvana – in their video for “In Bloom” (1991) – makes an appearance on a show that strongly resembles The Beatles’ appearance on The Ed Sullivan Show. They adopt the same guise as Weezer, but midway through their song the camera cuts to an alternate reality that more closely resembles the sentiment of the music, where the band – now in dresses instead of matching suits – abandons their performance and destroys the period setpieces. In one cutaway, Krist Novoselic positions his guitar like an erect cock while Kurt Kobain stands over him in a dress and bangs out his guitar solo. Not exactly the 50’s rock you remember, am I right folks? The cutaways are so full of subversive metaphors – against the music industry, nostalgia, conservative culture, etc. – that you could probably write a whole book on the topic.

Weezer’s music on this album really plays to a new outlet for emotional expression in rock: straightforward and without the bristling anger that much grunge rock embodied. While Cobain was a repressive and depressed man in real life, his music was agressive and expressionistic. Rivers Cuomo captures the attitude of repressive, inwardly-focused adolescence and translates that directly into his lyrics, prefiguring the explosion of niche (read nerd) culture that we live in today.

The album itself was certified 3M in sales, and I recall joining the bandwagon and really connecting to the source material. While I was too young to get the D&D/Kiss culture discussed in “In The Garage,” I definitely played extremely dorky games like Axis and Allies, Stratego, Shogun, as well as every Legend of Zelda game you can think of. It still strikes a nostalgic chord in me to this day. The song taps into a very pre-internet notion that millions of people shared similar interests as you, but you just didn’t know it.

The pining of tracks like “The World Has Turned And Left Me Here” and “Only In Dreams” resonates universally, especially the later which develops a bizarre fantasy of actually approaching your ideal soul mate only to fixate on your own awkwardness. The chorus relates the moment of realization where the narrator awakens and realizes his self-actualizing, romantic encounter was only an illusion:

Only in dreams you see what it means,
Reach out a hand, hold onto hers,
But when you wake it’s all been erased,
And so it seems only in dreams

The chorus can be read as a sort of resignation, where the prolonged interlude that follows is a swelling of disappointment and despair that breaks any resolution the narrator had developed. The bass line’s steady presence throughout the track gives it the cohesiveness of a sort of mini-suite.

Solid tracks like “Surf Wax America” and “Holiday” show the band’s ability to deliver a propulsive track and then back off, something that would crop up repeatedly in Cuomo’s intensely personal Pinkerton, the band’s next album. They can also go full tilt for the duration, as is demonstrated in the classic (and my favorite) track “My Name is Jonas.” Almost twenty years later, I still can’t get enough of that song. For sure it’s one of my top ten tracks of the 1990’s and it hasn’t seen many equals since then in my opinion.

So Weezer was busy opening the door for punk and alternative acts to break into the Emo circuit in 1994, and we saw that they could deliver solid, heartfelt music that still rocked pretty hard in the process. Sadly, their promise all but disappeared with the goofy lyrics and indulgent music following their (somewhat early) return-to-form record, Weezer (2001). In my opinion, almost everything they have made after that point has been partially responsible for major label support for godawful grandstanding and silliness in rock music, as well as the general whininess and trashy sound of the “screamo” genre.