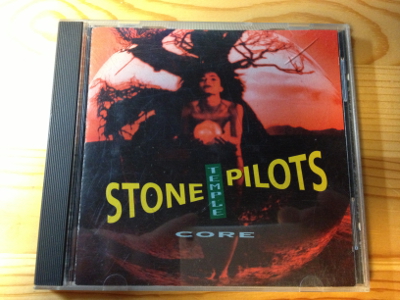 In the self-revisionist biography created in everybody’s mind, most of us recollect comparatively few negatives as opposed to the vast quantity of positives that populate our memories. Often, we are reminded by signs and tokens of past foolishness that we carefully censor so as to avoid cringing our lives away.

This is part of the reason why I am so happy I lugged a box of jewel cases around to remind me of the many musical blunders that dot my music listening history. Stone Temple Pilot’s Core falls decisively in that camp, as I can’t possibly fathom putting this record on and enjoying it in the slightest. Yet at the time, it was probably one of the most important records in my limited collection.

I can only speculate on why I valued this record so highly, but here is my theory. Growing up I was surrounded by a wide variety of music: classical, oldies (which are quizzically the same songs played on “oldies” radio in this decade), contemporary pop/rock at my family’s printing shop and in my brothers’ cars, and so on. STP was a hard, aggressive, sometimes melodic sound that was very different from what the older generations were listening to (my grandparents still watched Lawrence Welk for Christ’s sake). Likewise, I had only a few CDs in my collection when I owned this album, so there wasn’t a lot of choice to go to. We all know of the desert island scenario, where at a certain point you go to the music you have when facing the prospect of hearing nothing at all. This is the best I can come up with for listening to this monstrosity.

I know for a fact that my older brothers hated this record. My oldest brother despised it, and my other brother (the aforementioned, Brad) told me that the STP were grunge posers, ripping off better bands like Pearl Jam and Alice in Chains. At the time I was defensive, but his assessment was correct in hindsight. This album is a second-rate knock off of Alice in Chains with very few redeeming qualities. 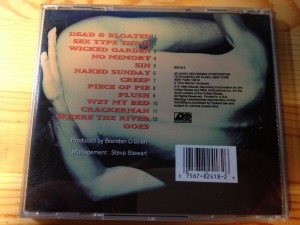 In my youth, I was a music skipper. The advent of CDs as opposed to cassettes meant you could easily skip from track to track, listening to only the tracks you liked and relegating the remainder to the dustbin of history. I’ll surely talk about this again, but the gist of it is that on albums such as this I have almost no memory of the interstitial tracks that essentially pad out the radio singles. In this case it’s with good reason, as those filler tracks are just godawful.

Listening again, even the singles are of marginal quality, full of unjustified rock star machismo. An aphorism I have heard in various incarnations goes as such: “The best way to become famous is to act famous.” I find that thought to contain a glaring omission, in that nothing looks worse than someone arrogantly donning the mantle of success before it is earned. When Robert Plant assumes the stage in The Song Remains the Same he does so as an unquestioned god of rock at the heigth of popularity, delivering the gospel and smiting the nonbelievers. Unjustified in all regards is STP’s front man Scott Weiland arrogantly bleating out mediocre lyrics while doing some sort of zombified lambada.

The album itself kicks off with the bombastic guitar pounding of “Dead & Bloated,” which is not to say that all the guitar work is horrible. Dean DeLeo plays some relatively solid guitar on many of the tracks, probably most convincingly on the regrettable “Sex Type Thing.” The track’s lyrics could not get much more rapey, including such perved-out gems as “You shouldn’t have worn that dress” and “You wouldn’t want me have to hurt you too.” It hits on the worst frat boy tendencies of vulgar bravado, and performing this song with a straight face should be a bit of an embarrassment, as would playing it on the radio 20 years later. Alas, it remains a hard rock radio staple, and is (somewhat justifiably) defended by the axiom of the artist not having to defend or conform to the values espoused by the narrator. However, a song must essentially say something, and the narrator of this song (in the guise of first-person narration) is totally unrebuked in his lust for date rape, leaving the listener to question: “what are audiences taking away from this music?”. I’m not going to get prudish or elitist – at least not for many years – and say the track is without any merits (as I said, the guitar work is really good), but it’s skirting a thin line that a better artist would be able to better justify. As Weiland comes across as a juvenile frat rocker (certainly at this point in his career), the track is somewhat indefensible.

Brendan O’Brien’s production work comes across heavily on Core. It sounds glossy and the performances are all very good, but unlike other O’Brien produced bands, this one has precious little to communicate. I take some seething undertones of rural (or perhaps urban) poverty from tracks like “Creep” and “Where the River Goes,” enough at least to connect Weiland’s gruff delivery to some of the rougher parts of grinding out an existence in the sticks. He’s definitely channeling the underbelly of America on “Plush” with the narrator scenting out a woman, yet the whole song seethes with barely-masked crassness: “And I feel so much depends on the weather, so is it raining in your bedroom?” This is definitely not music you put on over a romantic dinner, but the music does hint at prospects of moving on to a more pop-ish line of recording, something STP would prove more adept at.

The best I can say of this album is that it definitely sends out a vibe and creates a sound. Whether that sound is something you would listen to more than once is the ultimate question. If I heard this on the radio in my car now, I’d slap at the preset buttons frantically. At the time of limited musical options when I first spun this CD, I must have only barely grasped some of the now obvious themes that course through this piece like so much bile. Its sustained popularity (with many tracks in the multi-million listens on Spotify) attests to the fact that a lot of people found something true in the album, something perhaps closer to the undercurrent represented in the lyrics.

Later, STP would come back surprisingly strong with Purple (1994) and a couple albums that demonstrated they had more range lyrically and musically and could enter and exit the trashy, L.A. junkyard, sleezbag motif rather than dwell on it as they do in Core.